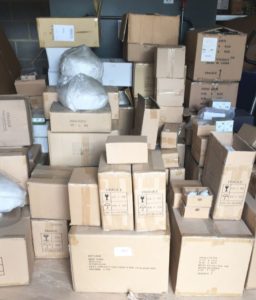 Housewares supplier The DRH Collection has made a generous donation to the Rainy Day Trust (RDT), delivering four pallets of ceramics and glassware to the industry charity earlier this month.

David Holmes, managing director of The DRH Collection, said: [RDT ceo] Bryan [Clover] had mentioned to us at one of the trade shows how he could always put product to good use, through raffles, auctions and also competitions, especially on social media. So we thought we would try that route this year. We’ve always been strong supporters of the Rainy Day Trust as it’s such a worthwhile cause.”

Bryan said RDT was “absolutely delighted” that The DRH Collection had been able to support the charity with such a substantial donation. “As the only charity that is here to support people working in the housewares sector, it is so important that we can work alongside suppliers as well as wholesalers and retailers,” he said.

“We were staggered to receive such an enormous amount of stock and are grateful to The DRH Collection for their belief and generosity. We will be able to use this to raise the funds we need to continue our work. This will go a long way to improving the lives of some seriously vulnerable people.”

RDT operates across three sectors (builders merchants, DIY & Hardware and Housewares & Tabletop) which have a combined turnover of more than £50 billion and employ close to 500,000 people.

It is the only charity which exists solely to help people who have worked in these industries, including DIY shops, hardware stores, builders merchants, garden centres, cookshops, and all the manufacturers, distributors and retailers in the UK who supply them.