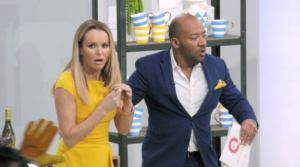 Amanda Holden was the victim of the first ‘undercover’ prank of the new series of ‘Ant & Dec’s Saturday Night Takeaway’ which returned to ITV last Saturday (February 24).

The TV presenter, actress and singer, best known best known as a judge on ITV’s ‘Britain’s Got Talent’, is also an ambassador for shopping channel QVC.

According to ITV, Amanda endured ‘the presenting gig of her nightmares’ when her ‘Britain’s Got Talent ‘colleagues Ant and Dec wreaked havoc during what she assumed was just another normal day selling her homeware range at QVC.

The star of stage and screen was unaware that the comedy duo Ant McPartlin and Declan Donnelly were doing everything possible to cause complications and calamity behind the scenes.

Amongst the pair’s escapades were instructing one of the QVC production team to call Amanda ‘Mandy Pandy’, discarding dirty cups and banana skins around the supposedly good as new set, gluing a drawer stuck, leaving a bemused Amanda desperate to cut to a commercial break – and even invading the set in the middle of Amanda’s broadcast.

Amanda designed and created her QVC homeware collection exclusively for the TV shopping channel last year. ‘BundleBerry by Amanda Holden’ is a range of furniture and home accessories that celebrates bright colours and patterns.