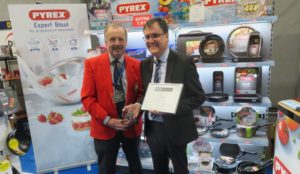 The award earned the housewares supplier’s key account manager Stephen Fennell a cash prize of £100, a certificate and a glass trophy for his efforts. Mark Dunn and Mark Fox of EPE received the runners-up prize of £50.

The award was judged by an independent panel and presented by Home Hardware chairman David Adams. He commented: “Pyrex had clearly worked hard on the presentation of their stand. It was extremely eye-catching and very well-lit. Products were merchandised to a high standard, new lines and special trade show pricing were clearly displayed and, as a retailer, I was instantly drawn to their stand.”

A total of 140 exhibitors attended the show, which was held on Tuesday (March 6) at Westpoint Arena in Exeter. Home Hardware is a dealer-owned buying group with over 400 members including independent housewares stores, cookshops, hardware retailers, and garden centres