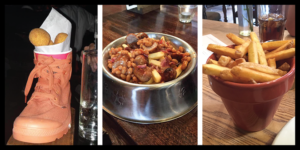 With more and more eateries serving food in gimmicky ‘plates’, a YouGov Survey has revealed that most British diners still prefer traditional styles of tableware.

To see exactly what the public is willing to eat their food off, YouGov Omnibus showed 2,030 Brits a series of unconventional eating vessels (drawn from popular Twitter feed @WeWantPlates) and asked the question: ‘Assuming they were clean, do you think it is acceptable or unacceptable for a restaurant, café or pub to serve food on or in the following items?’

Of the objects shown, 99% preferred a circular plate, followed by 96% opting for a square plate. A total of 69% felt fine with slate, while 64% were relaxed with a wooden board and 53% were happy with plant pots.

YouGov data journalist Matthew Smith said: “Unsurprisingly, the standard circular plate was the least controversial vessel –pretty much everyone believes they are an acceptable way to serve food.

“The results also show that William Sitwell seems to have lost the war on square plates, as 96% of Brits consider them an appropriate surface for food. (In 2014, the ‘MasterChef’ judge apparently described square plates as ‘an abomination’.)

“Slates and wooden boards also receive the backing of the majority of Brits. Both are staples of restaurants and gastropubs attempting to affect a classier atmosphere. Perhaps as a result, they are the only two vessels on which there’s a noticeable difference between working and middle class opinion.

He concluded: “While this selection of unusual culinary conveya4nces may cause some to raise their brows and roll their eyes, we may see more of them in future.

“The results also show that younger Brits are generally more likely than their elder peers to consider it okay to serve food on or in unconventional items.”