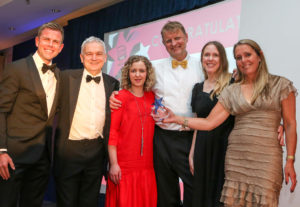 For the second consecutive year, ProCook scooped the prize of best multi-channel brand with annual sales of £15 million-£30 million B2C (business to consumer).

ProCook owner and founder Daniel O’Neill was in attendance with his team at the awards ceremony, which took place last Thursday (June 15) at the Hurlingham Club in London.

Daniel said: “We’re absolutely delighted to be bringing home another Direct Commerce Award. The team at ProCook continue to work tirelessly to deliver excellent products at unbeatable prices, and this is a welcome reward for all that hard work. It’s an absolute honour to be recognised by the Direct Commerce Association – we’re in great company.”

ProCook ceo Steve Sanders commented: “We’re extremely proud to have taken home this prize and want to thank our entire team for their incredible efforts.

He added: We’re continuing with our international expansion this year and opening several new stores, and look forward to returning to the ECMOD Direct Commerce Awards next year.”

ProCook was founded 20 years ago and supplies housewares for up for 50% less than other brands. Headquartered in Gloucester, it operates 26 stores nationwide and has a fast-growing online store as well as stores on several digital marketplaces.

Last year the business opened four bricks-and-mortar stores and expanded into the French and German marketplaces.