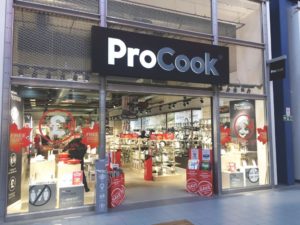 Following the news announced yesterday (Thursday May 30) that ProCook is closing the Steamer Trading brand which it saved from administration in January, the housewares chain has shared more details.

ProCook originally bought 27 of Steamer Trading’s 38 stores, along with the ecommerce business and head office team. Ten ‘underperforming’ stores which were not part of the sale closed immediately. The affected branches were Battle, Heathfield, Westerham, Dorking, Bluewater, Taunton, Wells, Cambridge, Glasgow and Bournemouth.

A further store and its accompanying cookery school in Knightsbridge, trading under the Divertimenti brand, was acquired by Steamer Trading founder Ben Phillips.

Yesterday, ProCook said that of the 21 remaining Steamer Trading stores, eight are due to close in mid-July. The branches affected are Beverley, Chichester, Horsham, Lymington,  Northallerton, Saffron Walden, Southampton and St Albans.

Today, ProCook said that this will result in a total of 24 full-time retail job losses. It added that the Steamer Trading head office is currently still operational but will also close in mid-July, with a total of 10 job losses.

A ProCook spokesperson told www.HousewaresLive.net: “The stores that are staying will be converted to ProCook stores at a rate of one or two per week. They will be holding ‘closing down’ sales for Steamer Trading until the stock has run through.”

The expansion will take the total number of ProCook locations across the UK to 50, broadening the scope of the retailer’s reach from out-of-town outlets and leisure destinations to more town centre locations.