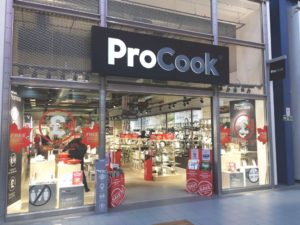 Multichannel housewares chain ProCook has reported strong sales growth for the first half of 2018/19.

The brand said its half-year sales figures were up 25% on the previous year and up 16% like-for-like. With bricks-and-mortar retail sales remaining stable on last year, the retailer attributed the performance to its ecommerce activity.

Sales on both ProCook’s own website procook.com and Amazon marketplaces surged 45% on 2017/18. ProCook now sells to seven European countries, with ‘very strong growth’ in France and Germany.

ProCook ceo Steve Sanders said: “Retail remains challenging but increasingly exciting for multichannel offerings such as ours. We have moved forward significantly within ecommerce, with much more to achieve in the remaining six months of 2018/19.”

He added: “The first six months of this year have been hard work, and there’s no sign of letting up in the run-up to peak. But we’re not complaining; it’s a great position to be in.”

ProCook has opened a total of eight shops across the UK this year. The two latest launches – and the last of the year – are at Dockside Outlet Centre in the Kent town of Chatham and Woodford Park Garden Centre at Stockport in Greater Manchester. The branches, which both measure about 1,700sq ft, open on October 19 and October 25 respectively.

Steve said: “We’re growing ProCook from the ground up and we believe retail stores are vital to that process. Retail brings in a huge proportion of sales for us, offers significant support to our ecommerce channels, and helps us maximise our reach as a brand. The latest two stores are in fantastic locations and we’re excited to see what they bring to the table in 2019.”

Headquartered in Gloucestershire, ProCook was founded over 20 years ago and supplies housewares with savings of up to 50% compared with other brands, by producing and delivering products direct to the customer with no middleman. Its 37 stores carry around 1,500 exclusive products spanning the cookware, kitchen accessories and tabletop categories.