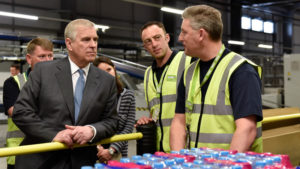 The £100 million warehouse in Cheshire serves the chain’s supermarkets across Manchester and Liverpool, along with Cheshire, Lancashire and North Wales

Prince Andrew was shown around the centre, which represents a major investment in the UK retail market by Asda’s US parent Walmart, by site manager Tom James, Asda deputy ceo and chief operating officer Roger Burnley.

The warehouse is 97% automated and sees 600 colleagues work alongside robotic technology to process around four million cases per week, serving 140 Asda stores across the North of England and beyond.

The centre can receive up to 3,000 pallets of product each day, which is split up and delivered to different stores via 250 drivers.

The automated nature of the facility means that it is also one of the most ergonomically friendly distribution centres in Europe; staff have standing work stations and are assisted by robots and 4.5km of conveyer belts.

At optimum capacity, the site can process 4.9 million cases and up to 8,000 lines of product, which makes it the biggest distribution centre in Europe, Asda says.

It features nine robotic cranes, which each control 27,000 individual pallet locations and lift pallets as high as 27 metres, which is higher than any fork lift truck currently can do, according to the retailer.

Located on the site of a former World War Two American air base at Burtonwood, the warehouse has a one million sq ft capacity. The site was selected due to its close proximity to Liverpool’s deep sea port, Manchester Airport and the local rail and motorway networks.

Roger said: “Our site really is impressive. His Royal Highness was genuinely interested in how the operation works, and was impressed at the innovations we’re pioneering at Warrington. It was great to be recognised for our state of the art technology, which ultimately provides Asda customers with a better shopping experience.”

Tom James, Warrington depot general manager, added: “It isn’t often you get a visit from royalty, but it was extremely exciting to be able to meet Prince Andrew and show him around.

“I have walked the tour route a thousand times but I still enjoy seeing the amazement on visitors’ faces as they walk around, especially when its royalty!”

Walmart is closely monitoring the operation, with plans to replicate similar facilities across its operations in North America.