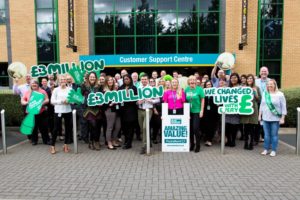 The collaboration between the retailer and the charity began in 2009 and was originally intended to run for one year. But, Poundland said, its colleagues and customers ‘took Macmillan Cancer Support to their hearts from day one’.

Over the past eight years they have thrown themselves into fundraising challenges including running marathons, cycling from Land’s End to John O’ Groats, racing Dragon Boats and much more. Poundland has also donated money to the charity through the sale of 5p carrier bags, Christmas cards and pin badges.

Poundland trading director Barry Williams said: “We’ve had an incredible partnership with Macmillan Cancer Support and its success has been down to the enthusiasm and hard work of both colleagues and customers.

“I’m delighted that we’ve smashed the £3 million milestone for this amazing charity which will go a long way to support the vital services they provide. It’s a brilliant achievement and one we’re all very proud of”.

Macmillan Cancer Support head of partnership management Nicola Keith added: “We want to send a heartfelt thank you to everyone who has been involved. Since the partnership began, colleagues and customers have inspired us with their enthusiasm and energy, and the money they’ve raised makes a real difference to lives of people living with cancer and their families.”