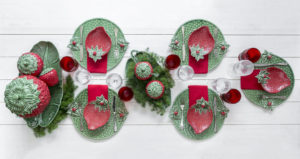 London cookshop Divertimenti will host a celebration of Portugal in collaboration with the Portuguese pottery studio Bordallo Pinheiro next month.

His Excellency, Manuel Lobo Antunes, the Portuguese Ambassador to the United Kingdom, will attend the exclusive function to mark the launch of this showcase.

The event, entitled A Taste of Portugal, will be held at the Divertimenti store at 227–229 Brompton Road in Knightsbridge on May 8. It will feature displays of Bordallo Pinheiro tableware and home décor pieces, alongside some unique pieces by London-based Portuguese ceramicist Jose Carvalho.

Divertimenti was founded in 1963 and is billed as one of the pioneering kitchenware stores in London. The Divertimenti Cookery School, which is located on the lower ground floor of Divertimenti, has hosted events by celebrity chefs including Tom Kerridge, Yotam Ottolenghi, Ken Hom, Sabrina Ghayour and Gordon Ramsay, offering classes for beginners through to skilled chefs.

‘Collaborations with international contemporary designers including Paula Rego, Joana Vasconcelos, Vik Muniz and Sain Clair Cemin, keep Bordallo Pinheiro’s designs at the forefront of style’. In 2019, Artichoke, one of the latest collections, was awarded a prestigious German Design Award.

Divertimenti was one of the first retailers to bring Bordallo Pinheiro’s work to the UK and carries a varied range of pieces from the brand. It will be displaying a selection of works from Bordallo Pinheiro in-store from May 8 until May 20.

Jose Carvalho was born in Portugal and is based at his workshop in Hammersmith. Divertimenti commented: ‘He works with his own glazes, which give his work a unique organic texture and colour.’ Jose has exhibited in various London venues including the Hepsibah gallery, Chelsea Physic Gardens and the Morley Gallery and is now represented by Otomys Contemporary Art. His work has been sold worldwide and used in projects by Conran and Partners, Molteni&C, Colefax & Fowler, BWT London and Heckfield Place. This event will mark Jose’s first collaboration with Divertimenti.

Chef Leandro Carreira grew up in the Portuguese city of Leira and cooked in Lisbon and with Andoni Luis Aduriz at Mugaritz in Spain. Moving to London as head chef at Nuno Mendes’ restaurant Viajante, Leandro spent time at Koya and Lyle’s before opening his own restaurant: Londrino. He was recently appointed executive head chef of new restaurant The Sea, The Sea, in Chelsea. Leandro’s cooking evokes the flavours, ingredients and traditions of his native Portugal – but explored through the experiences of a chef who now calls London his home. Leandro will prepare a range of dishes, using Bordallo Pinheiro’s ceramics, for guests at the event.

Brompton Road has long been established as one of the capital’s key design destinations. Alongside world-class museums including the V&A, many international design brands including B&B Italia, Molteni&C Dada and Cassina sit alongside retailers including Divertimenti, Skandium and the Conran Shop.