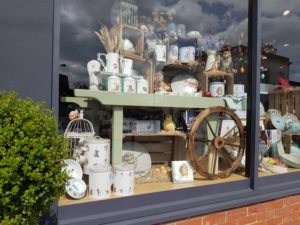 Portmeirion Group has revealed the winners of a window display competition held in April to promote its Royal Worcester Wrendale Designs collection.

The Stoke-on-Trent based housewares company said sales of this giftware range have been ‘phenomenal’ worldwide since it launched in 2013.

To celebrate the collection’s success, Wrendale Design’s founder and designer Hannah Dale and the Portmeirion Group asked UK stockists to create a ‘striking’ window display for a minimum period of April 1 to April 30.

Each store was free to choose a theme and style for the display which had to contain only Wrendale Designs products, with 50% from Royal Worcester’s Wrendale Designs collection. Props, POS and merchandising materials could also be used.

The brief was that the display ‘must ignite the hearts of passers-by and make them fall helplessly in love with Wrendale Designs’.

They are: Webbs of Tenterden in Kent, Potters Cookshop in Essex, Heart of the Home in Lancashire, The Hollies Farm Shop in Cheshire, Bromley & Co in Suffolk and Prillys Pantry in North Yorkshire.

Each has been awarded £300 (SRP) worth of Royal Worcester Wrendale Designs free stock, £100 Portmeirion Group voucher for the team who created the display, and a bespoke ‘winner’ certificate created by Hannah.

Due to the high standard of the entries, the judges agreed that a further three stores should be highly commended. They are: Daniel department store of Windsor, Elegance in Lockerbie and The Granite House at Fort William.

Each receives 12 Royal Worcester Wrendale Designs mugs, £50 Portmeirion Group voucher for the team who created the display, and a certificate.

The remaining 19 stores will each be sent 12 Royal Worcester Wrendale Designs mugs.

Hannah said: “What a fantastic response we had from our retailers: 28 entries and each and every one was absolutely brilliant. The six winning stores showed real creative talent. I was truly blown away.”

Phil added: “The standard of entries just goes to show that the retailers on our high streets have a huge amount to offer. Each store illustrated creative talent and commercial acumen.”

The competition was also a success on social media, with fans taking part in a ‘selfie contest’ using the retailers’ displays as backgrounds in their images. With over 50 entries via Instagram and Facebook, the campaign received thousands of ‘likes’, with customers sharing their posts.

The Wrendale Designs portfolio includes ceramics, textiles and melamine produced in collaboration with Royal Worcester, as well as stationery and tinware.

Royal Worcester has been manufacturing ceramics for over 250 years. It was acquired by Portmeirion Group, in 2009.