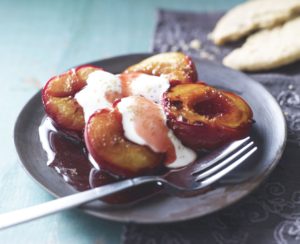 Waitrose claims this is the earliest British plums have ever been sold by a supermarket, thanks to recent ‘near perfect’

A combination of bright and warm days balanced with cooler evenings over the last few weeks has led to a much earlier launch.

Waitrose fruit buyer Tim Stevens said: “Seeing a crop arrive two weeks early is a huge deal and shows just how good the weather has been for plums. You’d normally see a change of only a few days each season for any fruit; so two weeks is like two years in fruit farming.”

He added: “British berries and cherries maybe the ‘pin up’ fruits at this time of year but plums should get more love. They are a deliciously versatile choice and are a hardy fruit for lunch boxes, or can be chopped over breakfast cereals, or even barbecued for an easy pudding.

“And there’s no reason, this weekend, you shouldn’t support this underdog British fruit by tucking into plums and cream when watching the tennis.”

The plums are grown on Castle Fruit Farms in Gloucestershire by husband and wife team Michael and Christiana Bentley. The variety that arrives first each year is the purple skinned Herman.

Later in the summer, Waitrose will stock an additional seven British varieties, and demand is expected to rocket as customers make the most of the short season.

Last year sales of plums rose by 137% when British varieties came into season and Waitrose is expecting the same response this year, judging by recent recipe searches on its website (waitrose.com).

A recipe for a plum traybake has seen web searches increase by 78% this week versus last year as shoppers anticipate the fruit’s return.

The first Waitrose British plums have been launched into five branches. As the season continues, the fruit will be in all branches by July 20.

Between July and September Waitrose will stock an additional four varieties.