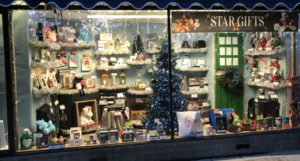 Home Hardware Southwest has named HT Perry & Son at Wellington in Somerset as the winner of its annual Christmas window dressing competition. Watson Home Hardware at Sutton-on-Sea in Lincolnshire received the runner’s up prize.

All Home Hardware retailers were invited to participate in the contest, which was judged by an independent panel.

The judges said that the overall standard of entry was exceptionally high but they particularly liked HT Perry’s use of props (including a festive green door with wreath and a fireplace with accessories and the thick silver tinsel) which complemented the Christmas ‘Star Gifts’ POS and window banner. The panel added: “The window was well lit and offered an abundance of curb appeal.”

Home Hardware would like to thank all members who participated in the competition. The dealer-owned wholesaler has more than 400 members including independent hardware retailers, housewares shops, cookshops, ironmongers and garden centres.