18th May 2018 News Comments Off on Patriotic shoppers stock up on classic British fare ahead of Royal Wedding 1,879 Views 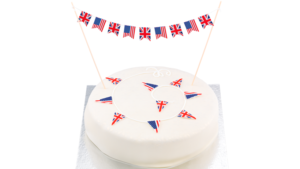 The Royal Wedding of Prince Harry and Meghan Markle tomorrow (Saturday May 19) is set to spark a feel good factor across the land, as Brits hold street, house and garden parties to celebrate, according to Tesco.

The supermarket chain expects sales of its specially created Royal Wedding cakes, along with traditional party food – and fizz to toast the couple’s health – will soar.

In the week leading up to the Royal Wedding, the retailer predicts it will sell five kilometres of bunting – enough to cover the distance of carriage procession from St. George’s Chapel to Windsor Castle.

He commented: “We know from the last Royal Wedding and the Queen’s Jubilee celebration just how much Brits love a royal celebration. British party classics like pork pies and Scotch eggs, as well as all the ingredients needed for a classic cream tea, are already in high demand.

“And for sports fans there is the added bonus of the FA and Scottish Final cup finals which take place later in the afternoon. So for many, the fun is likely to last into the night.”

Tesco has created a special Victoria sponge, Royal Wedding bouquet and shortbread housed in a commemorative tin to mark the royal occasion.