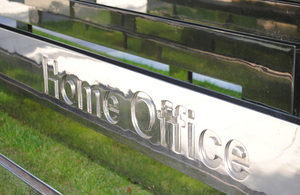 The Offensive Weapons Act has today (Thursday May 16) received Royal Assent, bringing in new measures in response to violent crime.

The Act will make it illegal to possess dangerous weapons in private, including knuckledusters, zombie knives and death star knives, and will make it a criminal offence to dispatch bladed products sold online without verifying the buyer is over 18.

According to the government’s website, Home Secretary Sajid Javid is also providing additional support to the police through Knife Crime Prevention Orders. These Orders will act as a deterrent to those vulnerable to becoming involved in knife crime. They will also enable the courts to place restrictions on individuals to help the police manage those at risk in the community.

Guidance on the process for Knife Crime Prevention Orders will be published, including operational guidance to police forces, ahead of a pilot in London.

Sajid Javid said: “As Home Secretary, I’m doing everything in my power to tackle the scourge of serious violence. Our new Offensive Weapons Act is a central part of this. These new laws will give police extra powers to seize dangerous weapons and ensure knives are less likely to make their way onto the streets in the first place.

“The Act will also see the introduction of Knife Crime Prevention Orders – a power the police called for. As well as tough law enforcement, it’s hugely important we continue our work to steer young people away from a life of crime in the first place.”

The Act includes other measures to tackle serious violence, including:

The government will also consult on guidance for some of the new measures in the Act and engage with businesses and industry on how the legislation will affect them before it comes into force.