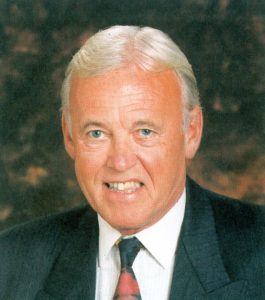 The company has released the following statement:

“John was the third generation of the Price family to be at the helm of the internationally-recognised cutlery firm.

Arthur John Mason Price was born in Birmingham in December 1928 and educated at Repton School in Derbyshire. As a young man he saw active service in Greece with the Durham Light Infantry in 1947, and received a commission in the Worcestershire Regiment the following year.

He joined the family firm in 1949, aged 21, and took courses in accountancy, design, tool-making and production engineering to learn the trade.

Over the next few years, John gained experience running Arthur Price subsidiaries and in 1959 (aged 31) he was made managing director.

The 1960s saw John participate in numerous trips abroad including Australia, Hong Kong, Korea and Moscow promoting British business on behalf of various trade organisations including the Government and the CBI.

Through the early 1970s, John masterminded the creation of the ‘largest flatware unit in England’ at Saltley in Birmingham, and became chairman of Arthur Price when his father stepped down in 1974.

In 1977, John personally designed and exclusively supplied cutlery for the supersonic aircraft Concorde – and in the same year, the company was granted the Royal Warrant by appointment to Her Majesty Queen Elizabeth II.

The mark of a successful businessman is his ability to steer his business through times of austerity. The cutlery industry, along with many others, was badly affected by the recession of 1981 and Arthur Price was not immune.

John led a major reorganisation of the business, shifting its operation towards retail from manufacturing. The Saltley site was closed, the Sheffield operation was enlarged, and the company established headquarters in Lichfield.

There are still manufacturing operations in Sheffield and Birmingham, and the Lichfield office manages the worldwide operations of this 200-strong company.

John was admitted to various guilds and received numerous awards over the years. He was a Freeman of the Goldsmiths Company London, a Freeman of the Cutlers Company Hallamshire, received the Business Sponsorship to the Arts award in 1982 and in 1986 was presented with the ‘Think British Personality of the Year Award’ by Jaguar chairman Sir John Egan.

In 1988 Arthur Price was granted the Royal Warrant by appointment to His Royal Highness The Prince of Wales.

Outside of business, Mr Price enjoyed playing and watching cricket and holidays with his wife Susie. He was also a jazz fanatic and had an encyclopaedic knowledge of the music form and enjoyed smoking cigars.

His eldest son Simon, chief executive of the family firm, said: “He led a crusade most of his life for the cutlery industry, and when he set his mind to something, he did his best to achieve it.

“Words people have used to describe him include gracious, gentleman, inspirational, lovely and a loyal friend. He was a great grandpa and very proud of his grandchildren.”

In addition to sons Simon and Nigel, John was a proud grandfather to James, Tori and Harry, William, Elizabeth and Yara and stepfather to Jonathan.

He is also survived by his sister June, aged 92.

John’s funeral will take place at St Giles Church, Whittington on Wednesday May 17 at 2.30pm.”