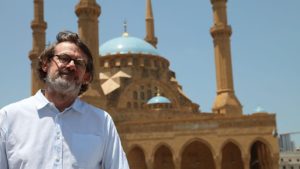 In a brand new TV series, Nigel Slater embarks on a Middle Eastern food adventure, exploring some of the oldest and grandest cuisines in the world.

The food writer, journalist and broadcaster visits Lebanon in the first episode of ‘Nigel Slater’s Middle East’, which airs this Friday (February 2) at 9pm on BBC Two.

The broadcaster said: ‘The flavours, colours and fragrances of the Middle East region have travelled the globe. But Nigel sets out to eat and cook with the people who make the dishes every day: home cooks. He also explores the landscapes and ingredients which define the recipes and dishes that have been passed on through generations.’

Nigel starts his journey in the capital of Beirut at the end of Ramadan (the ninth month of the Islamic calendar, observed by Muslims worldwide as a month of fasting). Here he is invited to celebrate Eid (the religious holiday that marks the end of Ramadan) with a local family. He then travels west to the Beqaa Valley close to the Syrian border, and south to Nabatieh near Israel.

On his journey, Nigel marvels at ‘the resilience of the country and its people and their survival and preservation through decades of war – and sees how this is reflected in their pride in their culture – and most importantly in their food’.

In later episodes, he will visit northern Iran and Turkey.

Nigel Slater in front of the Mohammad al Amin mosque in downtown Beirut, the capital and largest city of Lebanon