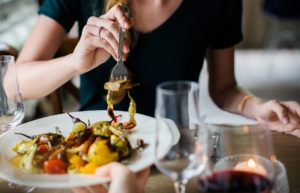 The dinner party will soon be consigned to the history books, according to new research.

A study into the nation’s entertaining habits has revealed that white napkins, starch tablecloths, bread rolls and prawn cocktails are a thing of the past.

According to the poll of 1,500 adults commissioned by Anglian Home Improvements, 84% of Brits think informal or casual kitchen suppers have replaced the ‘stuffy’ dinner party of old.

The survey also revealed that because we’re ditching a ‘dining room’ culture, 65% of respondents are now more sociable than ever, having friends over three times a month on average.

The report claims Brits host an average of 36 supper and lunch parties every year at their homes, splashing out just over £3,000 a year on food and drink. On average, £52 is spent on food for guests and a further £33 on alcohol.

Saturday night is the favourite time to entertain for 54% of us, followed by Friday night (20%).

But as ‘casual’ as we appear in our entertaining, Brits secretly still pull all the stops out to impress. A total of 62% admit that they tidy and clean the house from top to bottom before guests arrive.

A spokesperson for Anglian Home Improvements said: “The results of our survey prove times are changing in terms of how we entertain. However, while our home hangouts are becoming more informal, we still want to socialise in style.

“So many of us take great pride in welcoming guests to a beautifully presented home and garden; and what better way to spend long summer days than sharing the very best food and wine with friends and family?”

Unfortunately though, it’s not all plain sailing, as almost half of Brits (44%) have been left less than impressed by their guests’ behaviour.

A total of 41% complained of guests drinking too much, while 26% have had to deal with a guest starting an inappropriate conversation. A further 22% have had a guest start an argument with a fellow diner, while 21% of hosts say a guest has turned up with people they didn’t know and hadn’t invited.

The findings also revealed a series of etiquette suggestions for modern entertaining, for both guests and hosts alike:

DOS AND DON’TS FOR GUESTS AND HOSTS
DO