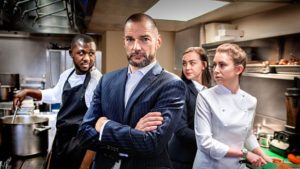 BBC Two is on the hunt for Britain’s next big restaurant brand in a new series which kicked off at 9pm yesterday(Thursday May 17) entitled ‘Million Pound Menu’.

Across six episodes, 12 budding restaurateurs who think they’ve got what it takes to go from pop-up to profit will seek to secure investment from one of the 10 potential investors to turn their dreams into a bricks and mortar reality.

The show is presented by award-winning French restaurant general manager Fred Sirieix, best known for appearing on Channel 4’s ‘First Dates’. Currently general manager at Michelin-starred restaurant Galvin at Windows at the London Hilton on Park Lane, he has worked in the restaurant industry for 25 years.

Each week Fred will welcome two sets of restaurant hopefuls, with their own ideas for new dining concepts. Each concept is given a three-day trial run in a 40-seater pop-up restaurant in the heart of Manchester, to try to win over the paying public and the investors.

The contestants will be scrutinised on their food, service, team-management and brand potential. And in one-to-one meetings with the investors, they will need to prove their business plans and financial figures stack up.

BBC Two Head of Popular Factual David Brindley said: “It’s a business opportunity like no other: the chance to open your very own restaurant and launch a multi-million pound brand. It’s a dream shared by so many but achieved by so few.

“In this series we’re giving the most exciting and genuinely credible restaurateurs the chance to prove their concept to the people who can transform their lives overnight. With millions of pounds on the table the stakes, and the drama, couldn’t be higher.”

In the opening episode on Thursday, Fred welcomes the first two food operators to the ‘Million Pound Menu’ kitchens. All-British fine dining concept Epoch is seeking £600,000 to open its first restaurant in central London and Scottish street-food trader ShrimpWreck is looking for a £100,000 investment.