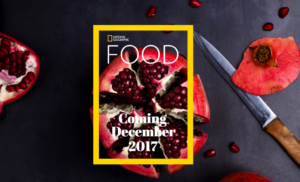 The first issue of ‘National Geographic Food (UK)’ launches on November 30 and will include reports and recipes by contributors including top chefs Mitch Tonks and Sabrina Ghayour.

The magazine will also invite foodies, gourmands and home chefs to share their favourite kitchen secrets on twitter. The best and most unusual tips will feature in the next issue, planned for early next year. In addition, respondents have the chance to win a one-night stay on a B&B basis for two people sharing at the Palé Hall in Wales and appearing in the magazine.

Maria Pieri, launch editor and editorial director of ‘National Geographic Food,’ said: “From origin to delivery, junk food to gourmet, food trends to trending food, and wellness to wastage, we’ll aim to debunk the myths and go behind the scenes, talking to producers, suppliers, farmers, chefs, restaurateurs, nutritionists… and family cooks, too. “Whether it’s the truth behind a trend, a secret history unveiled, a favourite recipe to covet or the bumpy journey from farm to fork, the magazine will champion sustainability, celebrate local culture and people, and present it all with glorious photography.”

Retailing for £4.30, the magazine is published under license by APL Media Limited (aplmedia.co.uk) from National Geographic Partners in Washington, D.C. As an introductory offer, readers can subscribe to the first three issues for £3.