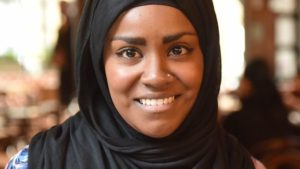 The 2015 ‘Great British Bake Off’ winner Nadiya Hussain is set to present a two-part series about one of the world’s biggest pilgrimages, the Hajj.

Every year, millions of pilgrims converge on Mecca for one of the world’s largest single gatherings of people. Any Muslim, who is fit and healthy and with the means to do so, is expected to make the pilgrimage at least once in their lifetime.

Nadiya completed the Hajj for the first time in 2013. In the show, she returns to Mecca to witness the Hajj and meet pilgrims to hear their stories.

The series follows Nadiya from her preparation in England, to her arrival and exploration of the exclusively Muslim city of Mecca, through the five days of Hajj itself with its rites and mass movement of three million people. After Hajj, she travels to Medina to visit the Prophet’s Mosque and Muhammad’s tomb.

Nadiya said: “The Hajj is one of the most intense and emotional experiences you can undertake and I’m delighted to be sharing my journey with BBC1 viewers. I’m really looking forward to showing first-hand exactly what it’s like to be there, and meeting some of the other pilgrims and hearing their stories – as well as finding out more about the cultural and historical significance of this incredible event.”