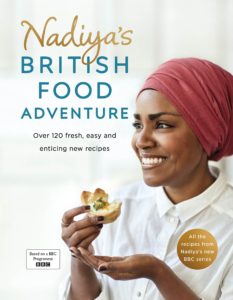 Heading up the league again is ‘Nadiya’s British Food Adventure’. Written by 2015 Bake Off winner Nadiya Hussain, the book is a tie-in to her current BBC2 show of the same name.

In this eight-part series, Nadiya travels across the country to meet the growers, producers and pioneers behind ‘the best of modern British food’ and creates new recipes using their produce.

Episode five is on tomorrow (Monday August 14) at 8.30pm. In this instalment Nadiya visits Yorkshire. She meets one of the area’s last shore fisherman, and cooks him baked sea trout with sun-dried tomatoes and lemons. Nadiya then discovers Razan Alsous’s local halloumi. At Razan’s factory, Nadiya massages the cheese and makes watermelon and halloumi skewers. She also makes rhubarb and custard ice cream sandwiches and Yorkshire puddings filled with strawberry jam and custard.

Inspired by her culinary tour, Nadiya has created more than 120 recipes for the book that mix the local ingredients she encounters with her favourite flavours, with a nod to her Bangladeshi roots.

Nadiya is also on BBC2 on Tuesday (August 15) as co-host of BBC2’s new competitive cookery show ‘The Big Family Cooking Showdown’, which makes its debut at 8pm.

At number two is Joe Wicks’ ‘Cooking for Family and Friends: 100 Lean Recipes to Enjoy Together’. All the recipes are organised into reduced-carb and post-workout chapters, just like Joe’s first three ‘Lean in 15’ books. The recipes are described as ‘big on flavour and packed with the hero ingredients you need to impress your mates, fuel your workout and burn fat’.

‘James Martin’s French Adventure’ is at number eight. This book showcases the chef’s favourite recipes from his current ITV series of the same name.

In the 10-part series, James travels the length and breadth of France sampling the local cuisine, to show viewers what inspired him as a chef. Episode six airs on Thursday (August 17) at 8.30pm, when James heads to Bresse, home to one of the country’s most famous ingredients: the Bresse chicken.

After visiting Louhans market, he cooks using the region’s revered chicken in his chicken blanquette. James then visits a chicken farm and museum and later meets one of his culinary heroes, Georges Blanc, owner of his eponymous three Michelin star restaurant.

The book contains 80 classic French recipes, as well as James’s own takes on some of the dishes he tastes on the road.

‘Comfort: Delicious Bakes and Family Treats’ by Candice Brown is in ninth place. This is the first cookbook by the 2016 Bake Off winner and is focused on home comforts.

The tome features recipes that Candice learned to bake from her nan and mum. They cover baking with kids, birthday parties for all ages, Christmas, afternoon tea, quick savoury bakes for weeknights and fancier recipes for weekends.

‘Tom Kerridge’s Dopamine Diet’ is in tenth position. The Michelin-starred chef claims that thanks to his Dopamine Diet, he has shed 11 stone over the past three years.

The recipes feature ingredients that, according to publisher Bloomsbury, trigger the release of the ‘happy hormone’ dopamine in your brain. Tom’s ‘dopamine heroes’ include dairy products such as double cream and yoghurt, good-quality meats including beef, chicken and turkey, and even chocolate. Bloomsbury said: ‘By ditching alcohol and starchy carbs in favour of plenty of protein, fresh fruit and veg, you will be eating meals that will help you shed the weight, whilst offering a satisfying intensity of flavour

One cookbook appears in the non-fiction paperback chart. At number six is ‘The Clever Guts Diet’ by Dr Michael Mosley. Drawing from research, Dr Mosley provides scientifically proven ways to control your cravings, boost your mood, and lose weight by increasing your ‘good gut bacteria’ that keeps you healthy. The book features recipes, meal plans, checklists and tips.

These book charts were published in ‘The Mail on Sunday’ ‘Event’ magazine on August 13.