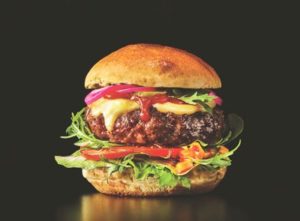 Burgers are booming at Marks & Spencer (M&S), with record sales last month – up 49% on the previous year

The report reveals that home-cooked burgers are eaten by more than two million Brits at least once a week or more, with Northern Ireland eating more than any other region

M&S concludes: ‘No longer just a fast food favourite, burgers are becoming increasingly sophisticated and nine out of ten Brits say that the most important thing about a home-cooked burger is the quality of the meat.

‘Brits truly do have a love for burgers, with 61% going as far as to say that a BBQ isn’t a barbecue without a burger. And with the World Cup under way, up to 1.9 million Brits are likely to be tucking into burgers, believing that watching sport is the perfect occasion to do so.’

The north-west is the biggest advocate of eating a burger while the football is on, while Wales is most likely to enjoy a burger as a midnight snack and Scotland believes the burger is the perfect food for a romantic date.

The unpredictable British summer won’t affect our enjoyment either, it seems. 40% of Brits say they enjoy burgers year-round and Northern Ireland, Scotland and North England prefer to cook them inside, under the grill, anyway.

54% of respondents said they can’t have a burger without cheese but top choices vary by region. The south-west are the least likely to choose the nation’s favourite of cheddar, instead opting for Monterey Jack, while the north-east are the most likely to add halloumi.

When it comes to condiments, 36% of Brits would choose tomato ketchup to accompany their burger, followed by burger relish at 14% and BBQ sauce at 10%.

The most popular choice to clothe the perfect beef burger was a classic sesame seed bun (28%). Bucking the health trend, M&S data shows that white bread is clear winner: over a third of customers buy white buns, while only one in 20 buy brown

However, healthy eating trends may affect some choices this summer, as a fifth of Brits say they don’t want cheese on their burgers and 4.5 million carb-conscious consumers will choose to have their burgers naked (with no bread). Women are more than twice as likely to choose a ‘naked burger’ than men, and are more likely to choose lettuce and tomato as toppings, while men prefer a fried egg or bacon

The north-east is the most health-conscious region with the highest number of M&S Skinny Burgers sold here – and they’re also the biggest consumers of wholemeal rolls.

The north-west are the biggest fans of the M&S veggie burger, while Wales consume the most fish burgers. The south-west are officially the beef burger connoisseurs, consuming the most of the retailer’s new Our Best Ever Burgers.