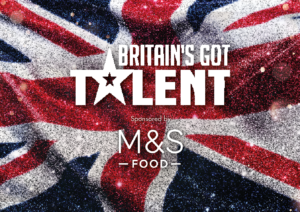 Marks & Spencer Food has announced its first ever TV sponsorship as it joins forces with ITV series ‘Britain’s Got Talent’.

The retailer said ‘Britain’s Got Talent’ is the UK’s most popular TV talent show, with a peak audience of 11.2 million viewers for the 2018 series. The sponsorship deal will see a wide range of M&S Food products beamed into the nation’s living rooms for the eight-week duration of the 2019 series.

Idents at the start and end of each episode and around the ad breaks will highlight M&S Food favourites, from family-sized pizzas to stir fries and dishes from its new vegan range, Plant Kitchen. Best-selling sweets such as Percy Pig and Colin the Caterpillar will also be making an appearance. The idents will appear on ITV2’s ‘Britain’s Got More Talent’ and the ITV Hub as well.

M&S is working with global media agency Mindshare UK on the push, which will cover a range of platforms including digital first activations and a social media campaign.

M&S Food marketing director Sharry Cramond said: “What better way to get into the hearts and minds of Britain’s families than to team up with the biggest family show on TV? Through this partnership we’ll be bringing M&S Food into millions of home each week, telling more families about our great value and great quality food – and encouraging them to choose M&S for their Saturday night family dinner.”

ITV deputy commercial director Simon Daglish added: “We’re thrilled that such a well-loved brand as M&S Food has chosen ‘Britain’s Got Talent’ for its first ever TV sponsorship. The brand new concept that we’ve developed with M&S enables them to showcase products from across their whole range throughout the series and bring something new to viewers each week.”