4th August 2017 News Comments Off on More shops closed than opened in the second quarter – but ‘confidence is key’ says LDC 1,477 Views 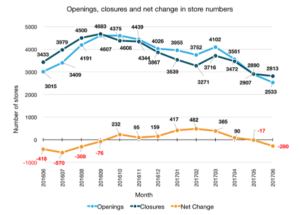 The national retail and leisure vacancy rate has risen for the first time in two years, according to new statistics.

The latest report from the Local Data Company reveals that the overall levels of shop openings and closures fell month-on-month in the second quarter – and are now at their lowest levels since 2014.

For independent stores, nine consecutive months of growth came to a sharp halt at the end of the quarter. However, this group did still grow net over the three months from April, adding +370 units.

In contrast, multiples continued their path of decline, after starting the year on a positive note. Following a first quarter of restrained growth, the second quarter saw numbers sink deep into decline with a net loss of -578 in total.

Net change (openings less closures) in store numbers fell into decline in the second quarter following a positive start to the year. Although the quarter started well, it ended up with a net loss of -207 stores overall for the three months of April to June.

This ended seven months of consecutive growth, dipping sharply by -280 stores in the month of June. Overall levels of opening and closure activity have been moderating since September 2016 and have now sunk to their lowest level in three years.

LDC classifies shops as convenience retail, service retail and comparison goods retail. It said the convenience retail, leisure and service retail categories all experienced net growth at the beginning of the year. However, the last month of Q2 2017 saw all categories join the comparison goods retail category with declining numbers.

This latter category continues to fare worst, having spent over a year in decline apart from a brief boost in February, losing -380 stores across the quarter and -1,574 overall in the last 12 months.

Town centres, shopping centres and retail park occupancy levels were all positive as the quarter started but ended in reverse by the close of Q2. Town centres have enjoyed a boost to their numbers since October 2016. But in Q2 2017 they fell back into the red and in June, they lost -163 stores in total.

Meanwhile, two straight years of a gently falling ‘All Vacancy’ rate (retail and leisure vacancy combined) came to an end in Q2. Having improved from 11.7% in mid-2015 to 10.9% in the first quarter of this year, Q2 saw this number tick back up to 11%. This was brought up by a slight increase in the retail vacancy rate during Q2 from 12% to 12.2%. The leisure vacancy rate continues to oscillate between 8.2% and 8%.

LDC noted that this small overall reversal may indicate a shift in the market but should not be over-stressed, as the mid-year figures for all three measures are very close to their starting positions for the beginning of 2017.

LDC director Matthew Hopkinson commented: “Net openings and vacancy rates ended the second quarter on falling graphs, but that should not be read as a strong indication that the retail market has turned decisively. Earnings growth is falling behind inflation but the numbers in work continue to rise through a series of record highs, so consumer expenditure could well carry on growing.”

He continued: “We have become used to talking about the effects of ‘uncertainty’ on retail, as though uncertainty is not natural in business. But uncertainty really only applied to the period before the referendum, when we were simply unsure of the outcome.

“The question at this point is whether consumers, and the businesses that service their wants and needs, are approaching the future with optimism or trepidation. Confidence is key.”

The Local Data Company visits over 3,000 towns and cities, retail parks and shopping centres to collate its figures. Each premises is visited and its occupancy status recorded as occupied, vacant or demolished. New shop openings and closures are tracked for each unit checked, and the history of each outlet is recorded to allow for retrospective analysis. Vacant units are those units which do not possess a trading business at that location on the day LDC visited it

The vacancy indices are based on a constant group of 650 towns. Openings and closures are derived from the results from 2,700 locations, including town centres, shopping centres and retail parks.

The openings and closures figures are based on a three month rolling average for the locations involved.