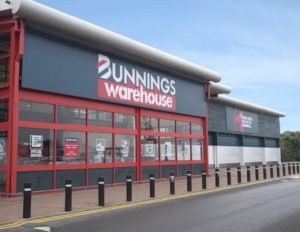 Bunnings has revealed that its fifth Bunnings Warehouse pilot store in the UK will open in the Kent town of Folkestone.

The company is leading retailer of home improvement and outdoor living products in Australia and New Zealand, which acquired Homebase for £340 million in February 2016.

The company, part of Australia’s Wesfarmers Group, plans to invest up to £500 million rolling out the Bunnings Warehouse format in the UK and Ireland over the next three to five years.

The first Bunnings Warehouse pilot store opened its doors in February in the Hertfordshire town of St. Albans, on the site of the former Homebase in Griffiths Way. The store is 67,000sq ft and employs 68 people, almost double the workforce of the previous Homebase store.

A second Bunnings Warehouse store opened on April 12 at Hatfield Road in St. Albans. Over 50 jobs were created at this branch, which measures 40,000sq ft.

The third store is planned for Hemel Hempstead in Hertfordshire and the fourth will be at Milton Keynes in Buckinghamshire. Bunnings are unable to confirm any more details at this stage.

But a Bunnings spokesperson did disclose: “The team in the existing Homebase store in Folkestone have been made aware and we will be shutting the doors in July. We expect the new Bunnings Warehouse to open in July at a nearby site formerly occupied by B&Q.”

The new store is approximately 75,000sq ft and will employ an additional 40 full and part-time team members.

The spokesperson added: “This is an exciting development for us as our pilot programme builds momentum, extending the Bunnings Warehouse offer to a new area of the UK. “Our first pilot store in Griffiths Way, St Albans, is performing well and we successfully opened our second pilot store in the town last month.”