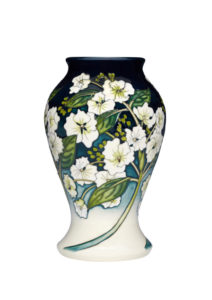 The Royal Horticultural Society (RHS) has announced the launch of a brand new limited edition vase from its licensing partner Moorcroft, which produces heritage art pottery.

The new vase, from Moorcroft designer Nicola Slaney, is called Chelsea’s Choice and celebrates the snow-white hydrangea that was awarded ‘Plant of the Year’ at the RHS Chelsea Flower Show in 2018. Chelsea’s Choice launches at the 2019 show, which takes place from May 21 to May 25.

The vase is available in a limited edition of only 35 pieces. Measuring seven inches high and three inches across at the base, it comes in a brand new bulbous shape inspired by the shape of a bulb itself, complete with wide shoulders and body to hold the intricate detail of the award-winning hydrangea. Nicola lifted the delicate lace cap white flowers and placed them onto an ink-coloured dark background for a dramatic contrast.

Each piece will include Nicola’s designer monogram and full signature, along with all Moorcroft backstamps of authenticity and the Royal Horticultural Society’s backstamp to show its official seal of approval.

Moorcroft director of legal & marketing Catherine Gage said: “The gorgeous snow-white hydrangea that was chosen as the 2018 Plant of the Year has inspired one of Nicola Slaney’s finest designs. We are delighted that Chelsea’s Choice is to be launched at RHS Chelsea 2019.”

RHS licensing manager Cathy Snow added: “With its inaugural use of a brand new vase shape and the inspiration gained from an RHS award-winning plant, this is a vase design that sets the bar high – and effortlessly meets it. This memorable design from a valued RHS partner will no doubt be a major talking point among all lovers of both art pottery – and beautiful plants – at the RHS Chelsea Flower Show.”

Share
Previous Scratch cooking heats up in the UK
Next Which? claims retailers ‘misleading’ consumers with kitchen and bathroom sales