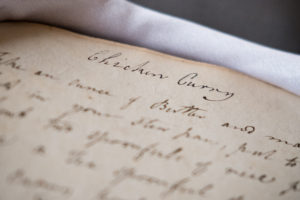 An antique list of recipes found at an abbey in Somerset has been turned into a cookbook.

Dating from 1793, the list was discovered in the archives of a library in a Benedictine monastery: Downside Abbey at Stratton-on-the-Fosse.

The recipes were used by monks more than 200 years ago to make dishes including ‘calves head turtle fashion’ and ‘fricassee of pigs’ feet and ears’.

The list also contains the oldest mention in England of ‘curry’. The curry recipe’s ingredients include curry powder, sugar, and other spices not widely available in the UK (but which passed through nearby Bristol due to the ‘slave trade triangle’).

The recipe calls for three spoonfuls of curry powder, a tea-spoonful of salt, two large onions, chicken breast, lemon rind, veal gravy and butter. The author also suggested swapping the chicken for lobster, veal or rabbit. The curry was served with rice.

There are 100 recipes in total, including plumb pudding, coconut tarts and almond faggots, All have now been transcribed and turned into a contemporary cookbook.

Extra care was taken to keep to the original spellings rather than modernise them. Pictures of the handwritten script are included in the new book.

Downside Abbey heritage officer Frances Bircher said: “We have made a huge amount of different recipes and tasted them.

“There is a range of ingredients. There are things you can still pick up in supermarkets today and there’s a lot of veal. Some of them are a bit more extreme – the whole animal was used, in some cases, for example.

“And all the recipes needed a bit of attention as there are no standardised cooking temperatures.

In one recipe for regional speciality Sally Lunn buns (famous in the nearby city of Bath), egg white was spread across the dough with a feather.

The monks also visited a nearby restaurant at Chewton Glen in Bristol to see how the recipes were cooked by professionals. Frances said many of the chefs at the Pony and Trap, which has held a Michelin star rating since 2011, were surprised at how uncomplicated the recipes were.

“They are quite simple recipes, with simple ingredients,” she said. “It is home cooking.”