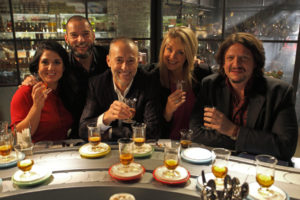 A team of celebrity food experts are starring in a new TV series called ‘Tried And Tasted: The Ultimate Shopping List’.

In the show, which made its debut on Channel 4 on Tuesday (June 6), the panel blind tests items from a typical shopping list and pits brands against each other to compile a guide to the best food and drink products available in Britain.

The broadcaster worked with Kantar World Panel (a company dealing in consumer knowledge and insights) to decide on the top selling products to put in front of the panel, from premium brands to own-label supermarket rivals.

In episode two, which airs on Tuesday (June 13) from 8pm to 8.30pm, fresh tortelloni pasta, coffee and sausages come under scrutiny, along with cheese and onion crisps.

In episode three on Tuesday June 20 at the same time, the panel will choose between different brands of prawn cocktail, margherita pizza and vanilla ice cream. Plus, the public will taste test oven chips.

Still to come on the series are products including smoked salmon and chicken tikka masala.

Share
Previous Britain’s greatest invention? The fridge, according to Giles Coren
Next Exclusively shows are just around the corner