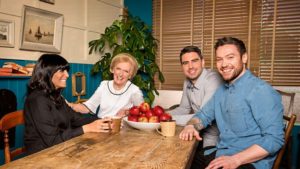 BBC One has revealed details of the 10 home cooks that will compete in ‘Britain’s Best Home Cook’: a brand new show that begins on Thursday (May 3) from 8pm to 9pm on BBC One.

From South Wales to Glasgow and from Salford to Kent, the contestants will leave their own homes from around Britain to live in a shared house during the competition. Each will bring a piece of home with them to personalise their kitchen stations in the studio with their treasured items and photographs.

Katie is a 32-year-old 999 police emergency call handler and dispatcher who lives in Neath, South Wales. She always cooked with her mother but fell out of love with cooking until she met her husband, Alan, which ignited her passion for home cooking. She is proud of her Welsh heritage and her family recipes, some of which are three or four generations old. She describes herself as an “everyday home cook” who loves to cook homely recipes, stews and casseroles to feed her friends and family.

Dipa is a 44-year-old civil servant from Wolverhampton. She was naturally interested in cooking from an early age and by the age of 11 was making curries. Dipa says her father’s Kenyan heritage and mother’s Indian heritage is her inspiration and. she loves cooking with fresh spices. She never uses a cookbook and relies on her instincts, simple ingredients and straightforward methods to prepare dishes for her husband and three children.

Fiona, 59, is a retired shopkeeper from County Down in Northern Ireland. She started collecting [US chef, restaurateur and cookery writer] Robert Carrier cookery magazines when she was 15 and her hobby became an obsession. She loves cooking homely, farmhouse kitchen style food for her family.

Cyrus is a 27-year-old wine consultant and entrepreneur from York. He started cooking properly when he was 16 and he loves creating French or Italian dishes. The process of combining ingredients and flavours to create dishes is what fascinates Cyrus and he strives to be ambitious in his home cooking.

Josie, 37, is a wealth client executive at a bank and lives in Glasgow. Intrigued by her grandparents’ and mother’s cooking, she was once asked to peel an onion and from that moment on was smitten with cooking. Certain recipes remind Josie of being back in the Philippines. She loves to recreate her favourite Filipino dishes and prides herself on being an instinctive cook – she never follows a recipe.

Philip, 48, is a maths teacher from Surrey who has loved food ever since he can remember. Traditional British cuisine is what he loves to cook most; prawn cocktail, a roast with all the trimmings and Black Forest gateau with a more modern take would be his ideal menu. ‘Delia’s Complete Cookery Course’ by Delia Smith is his cookbook bible because it was a huge source of inspiration while growing up.

Pippa is a 28-year-old home cook from Salford. She works as an oncology research biobank technician and was taught to cook by her grandma who made homely food. Her granddad used to take her to a dim sum restaurant with a Chinese supermarket underneath which she would peruse – and this drew her to her love of Asian food.

Q, 38, is a children’s A & E nurse from Balcombe in West Sussex. She grew up in Slovakia where food was central to family life and she cooks with her mother’s knife, which she has used for years. She describes her style of home cooking as continental with French influences, using simple ingredients.

Tobi, 27, is a compliance manager from London who started cooking with his mum and gran when he was just seven years old. He became the stand-in cook for his three brothers whenever his mum and dad were busy. He loves cooking food inspired by his British Nigerian heritage along with French cuisine.

Trevor, 29, is a farmer from Kent whose love of cooking came from his mum, grandmother and Auntie Irene. Coming from a farming background, Trevor is inspired by, and has a heartfelt appreciation of, ingredients. He enjoys cooking with spices and loves bold flavours.