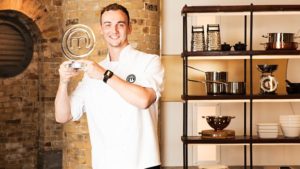 Laurence Henry, 26, was crowned the 2018 champion of BBC Two’s ‘MasterChef: The Professionals’ on December 20.

The youngest of the 2018 series’ finalists, he is the twelfth winner to be awarded the prestigious title, and become part ‘MasterChef: The Professionals’ history along with past champions Gary Maclean, Derek Johnstone, Steve Groves, Claire Lara, Ash Mair, joint winners Keri Moss and Anton Piotrowski, Steven Edwards, Jamie Scott, Mark Stinchcombe and the 2017 winner Craig Johnston.

Commenting on his win, Laurence said: “It’s been a really long journey, I have certainly learned a lot about myself and found my feet. With this kind of ending, who knows what the future holds? It’s just so exciting! I still have a lot to learn in my current role so I don’t plan on moving on any time soon. I’m exploring the possibility of opening my own restaurant in the future. However, before all this, I plan on having a bit of time off and travelling.”

On his MasterChef experience, Laurence added: “I had thought about entering the competition for a few years but in 2018 I felt my knowledge, skills and confidence were finally at a level that could see me through. Winning the show is a dream come true. It has been the goal from day one and I’m ecstatic I’ve managed to get all the way to the end.”

Monica Galetti said: “Laurence is a chef who cooks from the heart. He is such a talented chef and the world is his to conquer. He has confidence and a true understanding of flavour. What a future this young chef has!”

Marcus Wareing said: “The food that Laurence cooked for us during the competition was outstanding. He is inventive, creative and leaves nothing behind in the kitchen. He gave it his all and his work ethic and professionalism is fantastic. As a chef, you couldn’t ask for more in the kitchen. In my opinion, he is the next generation.”

Gregg Wallace said: “For a chef so young he is an immense talent. He has a hunger for knowledge and he is willing to push himself until he accomplishes greatness.”

Laurence, who grew up in Nottingham, trained as a chef at the Ashburton Chefs Academy in Devon.

Applications for ‘MasterChef: The Professionals’ 2019 are now open.