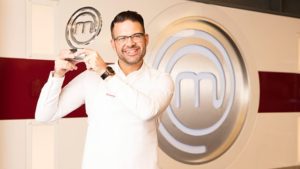 In the final week, Kenny travelled to Carlton Towers in Yorkshire – the home of Lord and Lady Fitzalan-Howard – and cooked a lunch for some of Yorkshire’s finest local producers and farmers under the guidance of Michelin-starred Tommy Banks; travelled to Peru to cook in Lima’s major fish market and work with chef Virgilio Martínez at his world-renowned restaurant Central to create a dinner for a host of Peruvian chefs, before heading back to London to be mentored by and cook for internationally renowned chef Ashley Palmer-Watts.

Commenting on his achievement, Kenny said: “I’ve learned so much and I couldn’t appreciate it any more. I’m just blown away. I’ve put my heart and soul into it and it’s been an absolute pleasure.”

John said: “I think Kenny’s journey has been extraordinary. His food has got more and more refined and his main course was make-my-heart-thump fantastic!”

Gregg added: “His starter was a stunningly beautiful dish – it was quality restaurant-style perfection – and his main course was even better. Kenny turned this competition on its head. What a brilliant champion.”

Looking back on his time in the competition, Kenny reflected: “No one prepares you for how hard it is in that kitchen, working to strict times under the watchful eyes of John and Gregg. They are cracking guys and it was great to get the chance to cook for them both.”

On future plans, he said: “I would love to get more young people cooking. I always love to get my daughters involved in the kitchen; my eldest just loves to cook and taste the food. Cooking teaches so much, from science to maths, and allows children to be creative and proud.

“I would also love to write about food and want to put together some great food events – be it supper clubs or private dining. The ultimate ambition would be to run a high-end gastro pub/B&B.”