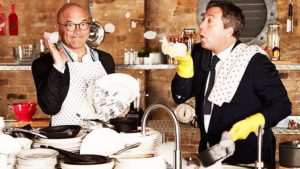 Series 14 of BBC One’s MasterChef kicks off next Monday (February 26) at 9pm.

Out of the thousands of applicants, 56 amateur cooks have made it through to compete over four weeks of heats on the competitive cookery show.

In the first episode of the 25-part series, seven hopefuls pull out all the stops to prove to judges John Torode and Gregg Wallace that they have the potential to become MasterChef 2018 Champion.

This year sees the return of the MasterChef Market which, BBC One claims, is ‘stocked full of the best-quality produce from across the world, including meat, fish, fruit, vegetables, nuts, pulses, grains and dairy’. The challenge is to invent and then cook one dish using anything from the Market.

This time, featured ingredients include beef mince, duck breasts, pancetta, cod and mussels. The contestants have one hour and 10 minutes to dazzle the judges and prove they should remain in the competition. After tasting all seven dishes, John and Gregg decide which four cooks are good enough to stay, while three are sent home.

The four remaining cooks then have one more challenge standing between them and a quarter-final place. They must cook two courses that will excite not just John and Gregg but also some very special guests.

Some of MasterChef’s past winners and finalists are returning to judge the food of this year’s new contenders to the throne. In episode one, the contestants must impress MasterChef 2017 finalists Steve Kielty and Giovanna Ryan and champion Saliha Mahmood-Ahmed.

After the four hopefuls have cooked, John and Gregg decide which three contestants deserve to take the next step in the competition and go through to the quarter-final on Friday (March 2).