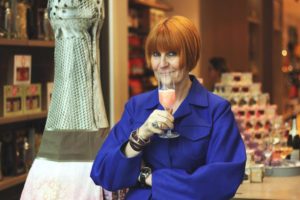 Mary Portas looked back at some of last year’s biggest shopping trends in the Channel 4 documentary ‘What Britain Bought in 2017’, which aired on December 28.

In the show, the retail consultant presented a review of the stand-out products on the nation’s £7.5 billion a week shopping list, from inflatables and big knickers to unicorns and fidget spinners.

Sales of Prosecco continued to skyrocket over the year, but last February some bubbly accessories took the market by storm.

Mary explained: “For years it’s been about the ‘lipstick effect’”. This is the theory that when facing an economic crisis, consumers are more willing to buy less costly luxury goods. So, instead of buying an expensive coat, for example, women will buy expensive lipstick. “But today,” she said, “we are far more likely to treat ourselves to a glass of the bubbly stuff. Britain is the world’s biggest fan of Prosecco, drinking a third of all Prosecco produced. And in the age of Instagram, retailers spotted a golden opportunity to sell us extras we didn’t even know we wanted.”

Samm Swain, buying and merchandising director of housewares chain Lakeland, told Mary: “You can add improve; you can ‘pimp’ your Prosecco. So we have Prosecco Shimmer [from PopaBall]: it’s a glittery, golden pink powder with a very subtle raspberry taste. You just add a little of the shimmer to your Prosecco for a perfect, Instagram-ready shimmer Prosecco. It’s all about the selfie; it’s bragging rights!”

The show noted that last year “it wasn’t just bubbly in our glasses. A gin cocktail craze swept the nation in 2017: we knocked back over 47 million bottles last year – that’s 7 seven million more than in 2016 and that’s well over a billion G&Ts.”

Pierpaolo Petrassi MW [Master of Wine], head of buying – beers, wines, spirits for supermarket chain Waitrose, commented: The growth of gin has been absolutely incredible. There are many different varieties and flavours. We’ve seen a 30% increase in gin in the last year alone. Over the last five years, we’ve probably doubled our sales quite comfortably.

When Mary asked “why are people buying now – and who is buying it?” he replied: “It would be tempting to think that it’s an older brigade who is really into an old fashioned G&T. But actually the gin as a base spirit drink is incredibly attractive. So we’ve seen growth across the board. We are seeing people drink less, but better. People are happy to spend more on a premium drink. It’s an amazing mid-week treat and that’s satisfying them. They are not feeling the need to go out and consume an awful lot more, which is a really good thing.”

The trend for smart home technology also came under the spotlight. Mary said sales of smart tech soared in 2017 – up 161% at electronic goods chain Maplin for example – with around a quarter of Brits now getting in on the act.

Johnathan Marsh, director of electricals and home technology, at department store group John Lewis, said: “One of the biggest, newest trends we’re seeing is the emergence of the ‘digital assistant’ and voice control.

“And we’re seeing this as the next big battleground. You’ve got the Google Home and the Amazon Echo really going hammer and tongs right now. The fact is that we’ve had the smart home come to life in the last few years, and these products provide the perfect conduit to actually controlling all those devices at once.”

According to the programme, since 2015 our love for arts and crafts has been on the up. But at the start of the year, one product in particular became an unexpected hit.

In the words of specialist chain Hobbycraft marketing manager David Westman: “In January, we saw pink yarn up 28%. The trend was very unexpected. We saw some weights and shades sell out but we bought in new, different textures and yarns to cater for that demand.”

Knitters, it seems, were crafting their response to one of the most seismic events of 2017 when Donald Trump took the oath of office as the president of the US on January 20, following an election campaign that was dogged with controversy.

“In living rooms across the country, women turned to craft activism to signal their dismay, by creating pink ‘pussy hats’ to wear as a protest response to his inauguration,” Mary claimed.

Traditionally, Britain was known as the country of meat and two veg but that’s all changing, the programme said. According to a nationwide poll, 25% of Brits have cut back on how much meat they eat, meaning a huge increase in ‘free-form’ products that replace traditionally meaty dishes.

Stephanie Chafor, head of buying – grocery for Waitrose, said: “Flexitarian is a big trend, with customers wanting to add more plant protein into their diets.” The flexitarian diet is a plant-based diet with the occasional addition of meat. (Flexitarians are also known as flexible vegetarians.) And, Mary claimed, with three and a half times more vegans now than in 2006, veganism is one of the fastest-growing lifestyle movements.

On a lighter note, Mary turned to products that offered “a little bit of surreal escapism” from the hard-hitting headlines of 2017. Last year was all about the unicorn, according to Carla Buzasi, managing director of trend forecasting agency WGSN. “Asda supermarket really leapt on this trend,” she said. “They have over 50 different products with a unicorn theme and sales of those products were up 350%.”

Lisa Rutherford, stationery and seasonal events buyer for department store group John Lewis, confirmed the mythical creature’s popularity. “Instagram is really important for trends like this,” she said. “When people find something special, they say: ‘I’ve found my unicorn’. We’ve seen mermaids emerging and chasing the unicorns and of course – very similar to the unicorn – it’s just about buying into something that’s magical and make-believe and makes people happy.”

Finally, Mary asked some of the retailers to predict the biggest hits of 2018. For Lisa Rutherford of John Lewis, the answer was simple: “We feel that inflatables are going to grow even further. We’ve expanded our range – and you will even be able to buy your own two-man inflatable ‘Love Island’.”

For Stephanie Chafor of Waitrose, after pepper and salt, tumeric is the next best-selling spice. “Customers are seeing that it offers a really great health benefit as well as a fantastic flavour,” she said. “Tumeric is just growing and growing.”

But the last word went to Soozie Jenkinson, head of design for lingerie, swim and active at high street retailer Marks & Spencer. “Watch this space for high-waisted Brazilian cut knickers,” she said. “We’ve sold a quarter of a million in the last two months. It’s a high waisted silhouette with a Brazilian bum, so it combines comfort and style all in one.”

Mary Portas poses with a glass of ‘pimped’ Prosecco