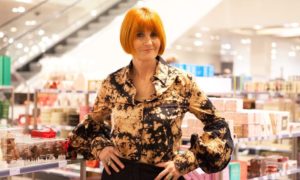 Mary Portas looked back at some of last year’s biggest shopping hits and surprises in the Channel 4 documentary ‘What Britain Bought in 2018’, which aired on January 2.

In the show, the retail consultant presented a study of the stand-out products and trends over the last 12 months.

She kicked off her review with a comment on the rise of veganism. “Gone are the days when we could just rely on Jane Fonda’s aerobics videos for our New Year resolutions,” she said. “Now, 168,000 people started 2018 with Veganuary. But it didn’t stop there. Veganism became the biggest food trend of the year. Tesco doubled its vegan food range in 2018, Britain’s largest vegan restaurant [Erpingham House] opened in Norwich (in an old steak house) and even Bake Off went vegan.

“Only two years ago there were about half a million vegans. There are now 3.5 million vegans in the UK. Veganism is kind of cool- and nowhere is it cooler than on social media. Last year #vegan reached 17 million Instagram posts.”

She continued: “But it wasn’t just fresh new vegans feeling worthy at the start of the year. In a tumultuous 12 months around the world, 2018 was also a year when we tried to instil some calm and kindness into our world, where ethics and wellbeing and just ‘doing the right thing’ influenced what we bought.

“But our attitudes were put into perspective when we ended 2017 with a heartfelt and moving wake-up call from a national treasure. [David] Attenborough’s dire warning and those troubling images from the BBC’s [nature documentary series] ‘Blue Planet II’ highlighted the issues of plastic in our oceans – and there were over 1.5 million #plastic posts on Instagram.

“By February, single-use plastics were the environmental bogeyman that had been under our noses the whole time. And big businesses also rushed to distance themselves from the plastic pariah, with many pledging to go fully reusable, recyclable or compostable over the next seven years.”

Mary then reflected on Spring 2018, claiming that the biggest impact on spending in the season “was the first royal baby of the year – or was it the first royal wedding? Harry and Meghan had an estimated global audience of 1.9 billion and everyone wanted to cash in on the wedding of the year. Iceland released their version of the wedding cake, sales of British food rose. and Tesco predicted scone sales of 1.5 million.”

And, she added: “There’s one foodie habit that we can’t seem to get enough of. While big restaurant chains are struggling (hit by food costs, rising rents and more competition) each of us now spends over £1,000 a year on takeaways.”

The programme said that in April it was announced that the takeaway delivery food market (firms such as Just Eat, Deliveroo and Uber Eat) has nearly doubled in the past decade from £2.4 million to £4.2 million.

According to Deliveroo ceo and co-founder Will Shu: “Of the under-30 category, about 28% of them order food delivery all the time. That same proportion of people who cooked at home once a week has dropped from 94% to 89%.”

Mary noted: “What will remain to be seen is whether what’s good for our busy 21st century lifestyles and demand for choice is good for our waistlines.”

By June, “Brexit was back in the news and we all needed a bit of optimism,” Mary said. “Just in time, the sun came out and the [World Cup] football [tournament] kicked off. We got knocked out but it did give TV sales an extra boost.”

Laurence Mitchell, director of electricals & home technology of John Lewis & Partners, confirmed this. He said: “Every four years, we see a huge spike in TVs and people moving towards these big cinematic experiences [screens]. In 2010, the most popular size of TV was the 32in; now it’s 55in.”

Mary then turned her attention to high street trading in general. “A bump in big TVs was a blip though, in a bad year for high street retailers,” she said. “At the end of June, the 169-year-old House of Fraser announced 31 store closures to avoid administration. But this was just one of many big brands that closed and some outlets vanished altogether (such as Maplin, Poundland and Toys ‘R’ Us). In total, 1,500 shops and 38,000 jobs were affected.”

On a lighter note, Mary highlighted the growing appeal of the Christmas Eve box. Inspired by Scandinavian traditions, each box is “packed with extra gifts to keep excited children quiet until morning,” she said.

Leanne Osborne, trading director of online gift retailer www.notonthehighstreet.com, gave her view on why this product has been such a success: “When we first saw the boxes introduced to the site around three years ago, in our second year of selling them our sales increased by over 400%. I think it’s because customers really love a new tradition, it encourages family time together, and it just helps prolong the magic of Christmas – which is why people are responding so well to it.”

But from all our purchases, which one best represents 2018? For Mary: “It’s an item which saw a 500% sales surge, becoming the symbol of our new environmental awareness. Maybe the travel cup is the shopping item of the year. And if the cup is our hero item, the plastic straw is this year’s villain.”

What else didn’t we buy in 2018? According to Mary: “New car sales had their worst September since the financial crash, prompted by new emissions tests and a move towards alternative fuels. John Lewis stopped selling DVD players, as Britain embraced downloading and streaming – and freed up some space. And we have been drinking 870 million fewer cups of black tea in favour of herbal and fruit teas.”

And Deliveroo ceo and co-founder Will Shu concluded: “The food health trend is just massive. We’ll see more restaurants that offer both a full vegan menu and a carnivorous menu.”