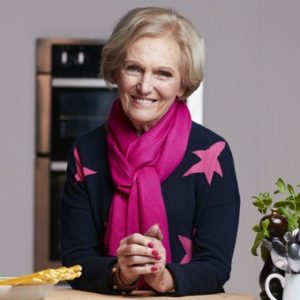 Mary Berry leads the way at number one with ‘Mary Berry Everyday’. In this official tie to the celebrity cook’s recent BBC TV series of the same name, Mary covers all the recipes from the show, including week night dinners, dishes for entertaining guests and sweet treats. There are also features on planning ahead, shopping well and using up leftovers.

At number two is ‘How to Eat Better: How to Shop, Store & Cook to Make Any Food A Superfood’ by James Wong.

This botanist co-presented the recent BBC2 series ‘The Secrets of Your Food’ with Dr Michael Mosley, which revealed the physics, chemistry and biology hidden inside food.

In his book, James gives hints and tips on how to make ‘everyday foods far healthier (and tastier) simply by changing the way you select, store and cook them, based on the scientific evidence from around the world, with more than 80 recipes to put the theory into practice’.

At number four is ‘Tom Kerridge’s Dopamine Diet: My Low-Carb, Stay Happy Way To Lose Weight’. The Michelin-starred chef says that thanks to his Dopamine Diet, he has shed 11 stone over the past three years.

He claims the book’s recipes feature ingredients that trigger the release of the brain’s ‘happy hormone’ dopamine so ‘it’s a diet that will make you feel good’.

Tom’s ‘dopamine heroes’ include dairy products such as double cream and yoghurt, good quality meats including beef, chicken and turkey, and even chocolate. The theory is that by ditching alcohol and carbs in favour of plenty of protein, fresh fruit and vegetables, ‘you will be eating meals that will help you shed weight, while offering a satisfying intensity of flavour’.

At number seven is ‘A Year of Beautiful Eating: Eat Fresh. Eat Seasonal. Glow With Health. All Year Round’ by Madeleine Shaw. In this book, the nutritional health coach focuses on ‘the importance of eating in tune with nature and supercharging your plate with what your body needs to look and feel beautiful season by season’.

In contrast, the non-fiction paperback bestsellers list has only one cookbook entry. ‘Lean in 15’ by fitness guru Joes Wicks is at number five (although the title has racked up a total of over 1.2million sales to date). This tome features100 recipes and guides readers through Joe’s signature HIIT (High Intensity Interval Training) home workouts.

These book charts appeared in ‘The Mail on Sunday’ ‘Event’ magazine on April 30. They were compiled by Nielsen Bookscan TCM, which collates real time sales from over 6,500 retailers, representing over 90% of the UK book market.