1st August 2017 News Comments Off on Mary Berry to lead the hunt for Britain’s Best Cook in new BBC One show 1,368 Views 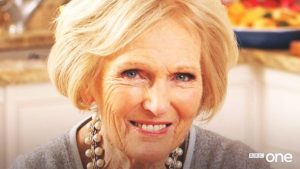 The broadcaster said: “At a time when British cooking has never been more varied, inspiring or of such high quality, this series will test the real-life expertise of truly great home cooks and will celebrate the food that people make for their loved ones every single day.”

BBC One continued: “Mary Berry is returning to her first love. With more than 75 cookery books to her name, her authority in the home kitchen is beyond question and she is the natural choice for the lead judge.”

Taking the reins as host is TV presenter Claudia Winkleman. Mary said: “I’m never more at home than when I have my judging hat on. This series is going to encourage proper home cooking, which I have always championed, and I cannot wait to start. Claudia, for me, is the icing on the cake.” Claudia added: “I’m over the moon to be part of this show.” The search for a second judge is under way.

Over eight 60-minute episodes, 10 contestants will be asked to serve ‘the most perfect version’ of dishes that define modern British home cooking, as well as create their own take on well-loved classics.

The judges will be looking for dishes that define ‘a new benchmark of excellence, whether it’s roast beef with the perfect roast potatoes, an ingenious twist on chicken curry or an irresistible chocolate pudding’. Each challenge will reveal new tips and techniques as the competitors battle to prove they have the skills, technical ability, resourcefulness and creativity to get through to the final and be crowned ‘Britain’s Best Cook’.

Charlotte Moore, director of BBC content, said: “Home cooking has quietly become one of the nation’s favourite obsessions, and so there is no better place than BBC One to compete for this crown.

“The queen of all judges Mary Berry will be the indisputable head judge, with the irresistible Claudia Winkleman hosting proceedings. But, who will be Mary’s judging partner? The search is on!”

According to the ‘Radio Times’, the BBC has confirmed that ‘Britain’s Best Cook’ will air in 2018.

The “queen of all judges” Mary Berry