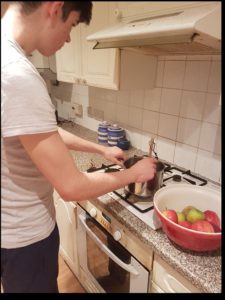 New research from Mintel reveals that Britain’s young men are more confident with cooking than DIY.

A survey by the market research firm into men’s life skills found that just one in four 16-34 year olds are very confident in their ability to tackle DIY jobs such as painting or wiring a plug, compared with half aged 65 and over.

Even fewer young men (22%) feel very confident about fixing basic car issues such as changing tyres or replacing water fluid, compared with 42% of Brits aged 65 and over.

And while 50% of men aged 65 and over say they feel very comfortable about assembling flat-pack furniture, this figure drops to just 28% of 16-34 year olds.

However, while DIY is proving something of a challenge for Britain’s young men, they are infinitely more confident in the kitchen than their older counterparts.

Mintel senior consumer lifestyles analyst Jack Duckett said: “Much has been made in the media of how the young are less handy when it comes to DIY than preceding generations.

“However, far from feeling emasculated, for today’s young men the ability to cook appears to be a more important indicator of modern masculinity, underlined by their significantly higher level of confidence in the kitchen compared to their older counterparts.”

Meanwhile, when looking for the handiest region for DIY, it seems best to head north. Almost half of men in Yorkshire and Humberside (46%) and the north-east and north-west (45%) feel very confident when it comes to putting together flat-pack furniture, compared with just 28% of Londoners.

But if a cupcake is on the menu, a London man is the best bet. Almost one quarter (23%) feel very confident about their baking skills compared with just 12% of those in Scotland.

Jack commented: “Regional differences in skill sets paint a vivid picture of how men’s perceptions of masculinity vary around the country.

“The men of Scotland and the north of England favour a traditional male role model, with skills oriented on DIY and household maintenance.

“By contrast, as we move south and into London, the focus shifts towards a more domestic skill set, as these men seek to carve out a new definition of masculinity and show its increasing fluidity.”

While Britain’s young men are busy improving their baking skills, it seems young women are not as focused on the kitchen.

Once again, confidence varies widely by generation; one-third (33%) of women aged 16-34 feel very confident about baking compared with 56% of women aged 65 and over.

The same is true of scratch cooking. Those aged 65 and over are almost twice (80%) as likely to be very confident at cooking a meal from scratch than those aged 16-34 (42%).

Finally, just as the nation’s men are struggling with DIY, this is proving equally challenging for young women. Just 13% of 16-34 year old women are very confident about household DIY maintenance, while 25% of the same group are confident about putting together household furniture.

Jack concludes: “As with men, the difference in confidence in skill sets between younger and older women can be strongly linked to experience, with younger women building confidence in domestic skills as they progress through life.

“For both younger men and women, there is also the issue of home ownership, with many young adults unable to get on the property ladder due to high property prices.

“For many young adults, this increasingly means that they remain in the family home – where they have less need to practice these skills as they are taken care of by their parents.”