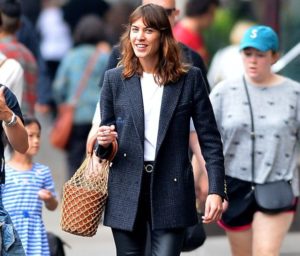 Macramé – a form of textile produced using knotting techniques – has seen a huge surge in popularity among Hobbycraft customers, with the retailer revealing that searches for macramé have seen an increase of 288% compared with last year.

The arts and crafts multiple claims the bohemian art form is ‘having a moment in the limelight’ amongst crafters and interior designers alike, with the macramé market bag and plant pot hanger quickly becoming go-to makes on its blog.

Hobbycraft also noted that its ‘Return of The Mac’ yarn (a soft cotton cord yarn designed specifically with macramé in mind) has sold over 2,000 balls since its launch less than three weeks ago; the equivalent of 150,000 metres of yarn.

The chain attributed some of macramés’s popularity to its appearances on the Instagram and Pinterest pages of celebrities and influencers. Presenter, model and fashion designer Alexa Chung (pictured) has been seen sporting a macramé styled bag on several occasions, and influencers such as Alessandra Ambrosia and Aimee Song have also been snapped with macramé accessories.

Hobbycraft added that a recent post on its blog called ‘how to get started in macramé’ has already received 2500 views, ‘as readers look to acquire the necessary skills to recreate the looks seen on their pin-ups’.

Katherine Paterson, customer director at Hobbycraft, said: “It seems the chic feel that macramé offers is becoming more and more desirable, and the fact that our customers can craft these themselves is really exciting.”

Founded in 1995, Hobbycraft bills itself as is the UK’s largest arts and crafts retailer with over 90 stores across the UK. It sells more than 35,000 arts and crafts products for hundreds of creative activities, from baking, home craft, art, jewellery making, knitting, sewing, kids’ crafts and model making to accessories for weddings, celebrations and more.