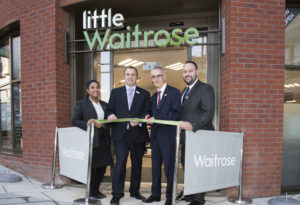 The supermarket chain’s convenience shop, on Regents Park Road, was unveiled by branch manager Mark Porter and two of his team, along with a representative from one of the first local causes chosen to benefit from the Waitrose Community Matters ‘green token’ scheme: Dr Christopher Baxter, medical director of North London Hospice.

The Royal National Institute of Blind People and Animal Aid & Support charity will join North London Hospice as the first three causes to benefit from the scheme.

At the end of the month, £500 will be shared between the three groups according to the number of tokens received from customers. Customers can continue to nominate different good causes each month, resulting in a total of £6,000 donated each year.

In addition, Waitrose Finchley Central staff will volunteer around 50 hours to local causes throughout the course of the year.