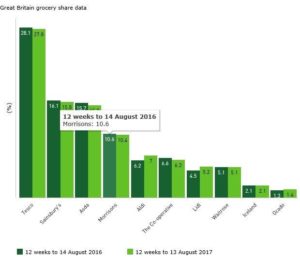 According to the latest data from Kantar Worldpanel for the 12 weeks to 13 August 13, the retailer lifted its sales by 18.9% in the period, raising its share to a new record high of 5.2% – up 0.7 percentage points year-on-year.

Kantar Worldpanel head of retail and consumer insight Fraser Mckevitt said: “Ten million households visited Lidl’s expanding network of stores during the past 12 weeks, with alcohol and fresh produce performing particularly well. Lidl is growing sales 40% faster with families than with households without children. Families tend to buy more items each time they shop, so strong growth with this demographic has helped Lidl increase its average basket size year-on-year.”

The first Lidl UK opened its doors in 1994. Now the retailer operates 650-plus stores and 10 distribution centres in Britain, employing some 20,000 people. The Lidl brand was founded in Germany and has grown a great deal to become one of Europe’s leading food retailers.

Fraser added: “Not far behind, Aldi [a fellow discounter and the fifth largest grocer] grew sales by 17.2%, attracting 1.1 million more shoppers through its doors than this time last year and increasing its market share by 0.8 percentage points to 7%.

“Meanwhile there is good news for the UK’s ‘big four’ grocers [Tesco, Morrisons, Sainsbury’s and Asda], as the recovery which has so far defined 2017 continues apace. All four managed to grow sales for the fifth consecutive period in a run of collective success not seen since 2013.

“However, this welcome period of sustained growth hasn’t been enough to entirely offset pressure from the discounters. The big four now account for just 69.3% of the UK grocery market – down from 76.3% five years ago – and that looks set to fall further in the coming months.”

Kantar Worldpanel monitors the household grocery purchasing habits of 30,000 demographically representative households in Britain. All data is based on the value of items bought by these consumers.