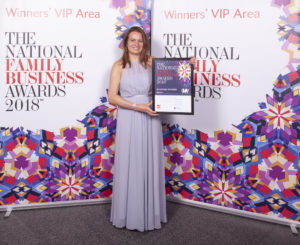 Independent home department store chain Leekes has been named Family Business of the Year at a prestigious awards ceremony.

Organised and hosted by Family Business Place, the Awards are dedicated to recognising the most outstanding family businesses across the UK and Ireland, from small local retailers to large manufacturing firms

Leekes Retail managing director Emma Leeke said: “We were totally delighted to have been announced as the regional winner for Wales at the National Family Business Awards. We were then absolutely thrilled when we discovered that we had been selected as the best of all the regional winners – and were then unveiled as the overall national award winner.

“It’s a great honour to have been recognised on a national level in our 120th year of trading against such strong competition, and we dedicate our award to the wider team at Leekes who we work alongside and who help make our business so special.”

Family Business Place was founded in 2009 and bills itself as ‘Britain’s biggest, most vibrant community for family-owned businesses’. It is itself a family business, which aims to offer advice, support and guidance to other family businesses. As well as The National Family Business Awards , it hosts conferences, private lunches, growth clubs and forum events; publishes a magazine; and is active on social media.

Share
Previous Laid back summer days cost Brits £1.5bn in garden thefts
Next Squire’s managers go ‘back to the floor’