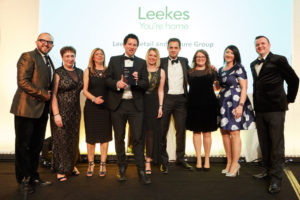 The news was announced at a prestigious ceremony held at Cardiff’s City Hall on April 5 hosted by Timothy Rhys-Evans MBE and attended by more than 400 guests.

Finance Awards Wales were established in 2017 to recognise the achievements of the country’s expanding finance sector.

Matthew Hyde, managing director of Finance Awards Wales, said: “In a changing world – and especially in times of uncertainty – one thing is sure: people are the difference. Finance Awards Wales celebrates the talented finance professionals of Wales and recognises the crucial role they play in the Welsh economy and in the organisations they represent. The standard and number of entries exceeded expectations and those who walked away with their awards are deserved winners.”

After a thorough and detailed interview process, the Leekes Retail and Leisure Group were announced as winners of this category and feedback from the judges included exceptionally positive comments about how the team successfully manage to deal with complex issues across the Group’s business which includes four Leekes home department stores (in Bilston in the West Midlands; Llantrisant, near Cardiff; Cross Hands in Carmarthenshire; and Melksham in Wiltshire), The Vale Resort hotel and Hensol Castle, as well as a new gin distillery project.

Mike Fowler, financial director of Leekes Retail Limited, said: “We were delighted to be shortlisted for such a prestigious award, but to win is a fantastic achievement for the team as a whole. We have worked extremely hard over the last 12 months to maintain the highest standards that we strive for as a business, and to be recognised by industry experts as the Best Finance Team in a medium/large business truly demonstrates the hard work we have put in.”