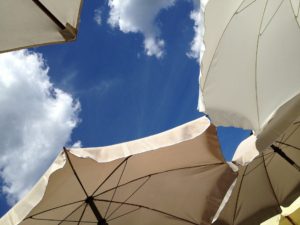 Brits are giving themselves a break this weekend, according to live search data pulled from eBay in the UK.

While the first May bank holiday was designated DIY time, with tools and paint searches rising, it seems the late May bank holiday is strictly for leisure, with garden furniture, sunglasses and hot tubs in the top searches.

The ecommerce giant says the next three days are also the time of the ‘Great Staycation’: searches for caravans, motorhomes and campervans are at 10 per minute ahead of the long weekend.

There is also a rising trend for air conditioning units. There were three searches a minute for aircon on eBay.co.uk as news of the warm weather hit on Wednesday.

The barbecue is also making an appearance too, with three searches a minute for the British summer staple ahead of the weekend.

But with weather due to turn over the later part of the bank holiday, eBay predicts that, based on 2016 data tracked against rainfall, wellies could be the next must-have, as thoughts turn to the festival season.

eBay’s head of home and garden Rhian Bartlett, said: “We know that everyone’s getting out and about this weekend but our live data shows people preparing to cope in the heat too. When the news of hot weather hit, customers were preparing with air con units or planning a UK getaway.”