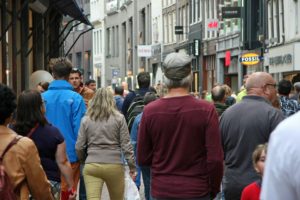 UK retail sales rose by 5.6% last month on a like-for-like basis from April 2016, according to the latest statistics from the British Retail Consortium (BRC) and KPMG.

Covering the four weeks to April 29, the BRC-KPMG retail sales monitor reveals that on a total basis, sales rose 6.3% in April, against flat growth in April 2016. The performance was positively distorted by the timing of Easter

BRC chief executive Helen Dickinson OBE said: “As expected, the Easter holidays provided the welcome boost to retail sales, which goes some way to making up for the disappointing start to the year.

“That said, the positive distortion from the timing of Easter was largely responsible for the month’s growth. Longer-term, the outlook isn’t as rosy.

“Taking a closer look at the sales figures: consumer spend on food and non-food items is diverging. Food categories continue to contribute the most weight to overall growth, although food inflation has a part to play in this. Meanwhile, consumers are being more cautious in their spending towards non-food products and focusing more on value priced lines.

“Although the figures do indicate that consumers are still willing to spend, with a cocktail of rising costs and slowing wage growth as the backdrop, conditions for consumers will get tougher.

“The next Government needs to deliver a plan that puts consumers first in its economic policies and the forthcoming Brexit negotiations.”

KPMG UK head of retail Paul Martin added: “April’s sales provided a brief period of respite for retailers following a relentless start to the year. However, much of the rise was driven by the timing of Easter and the growing inflationary pressures the sector is facing, rather than a sudden upswing in consumer confidence.

“Retailers need to ensure that last month’s boost doesn’t lull them into a false sense of security. The retail landscape is changing fast and as such, agility and the ability to manage costs will remain critical.”