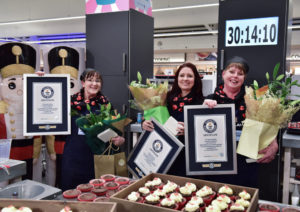 Housewares chain Lakeland is ‘over the moon’ after triumphing in a Guinness World Record attempt held at its flagship store in Windermere on November 9 and November 10.

Three staff members – Stella Wilson, Zoey Haliwell and Jane Nicholson – baked continuously for 30 consecutive hours each, from 11am on November 9 to 5pm on November 10. They were rewarded for their achievement with certificates, given at the end of the challenge by a representative of the Guinness World Record Book.

During the period, the trio baked over 8,000 cupcakes, which were sold to staff and customers, with all the money raised (£2,644) going to The Royal British Legion charity.

All other Lakeland stores across the country also baked in-store and sold their cupcakes for the same cause.

Windermere store manager Robin Moffatt said: “The team approached this event with determination, passion and a real sense of fun. I’m really proud that Stella, Zoey and Jane have achieved this great accolade and have joined the exclusive group of World Record Holders.”

He added: “The cakes themselves couldn’t have been baked without the donation of flour from Carr’s, eggs from Steven Procter from Selside and icing from Renshaw.

“Kenwood kindly donated a stand mixer as a prize for our raffle, raising yet more money for The Royal British Legion, while Michael from Kenwood and Sheila and Holly from Renshaw even dedicated a few hours of their time to ice cakes for us – so a huge thank you to them, as with over 8,000 cakes to ice, we needed all the help we could get!

“Our ceo Catherine Nunn was in at 5am icing the backlog of cakes baked through the night, along with many other Lakeland colleagues and their friends and family, who merrily built and packed cake boxes, iced cakes and cut out [Royal British Legion] poppies for decoration throughout the event.

“Our kitchenware buyer Veronica Davidson iced cakes from 1am to 6am and Stephen from the retail team valiantly helped out for the whole 30 hours – that’s dedication!”