Lakeland celebrates 40 years in the heart of Chester

15th May 2019 News, Top Stories Comments Off on Lakeland celebrates 40 years in the heart of Chester 1,690 Views 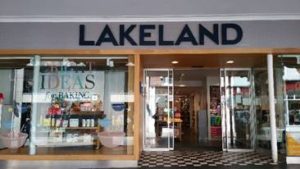 Lakeland will commemorate the 40th anniversary of its store in the Cheshire city of Chester during the upcoming late May Bank Holiday.

The housewares chain is inviting customers to mark the milestone in-store, along with colleagues old and new, over the Spring Bank Holiday (from Friday May 24 through to Monday May 27).

Customers can enjoy an in-store tea party with cakes and coffee, watch cupcake decorating and demonstrations – and admire a huge 5ft cake standing at the centre of the celebrations.

They can also take advantage of a free gift with any purchase over £20 whilst stocks last.

The retailer said: ‘Lakeland was founded by Alan Rayner, who started out selling plastic bags to farmers. From the garage of his home in Windermere, Alan and his wife Dorothy set up a mail order business supplying agricultural plastics and home-freezing products and their sons – Sam, Julian and Martin – were roped in to count the bags into packs of 100. The three brothers took over the business when Alan retired in 1974, following their father’s philosophy of: always look after the customer and the business will look after itself.

‘In 1979, Chester was Lakeland’s first venture into the high street – a tiny little shop tucked away on the top level of Chester’s famous Rows [double height rows of shops and walkways]. The brothers fitted out the store themselves with a helping hand from the team. Overnight accommodation was in the form of sleeping bags on the top floor, and the reward for a hard day’s work was an Italian restaurant for dinner!

‘Throughout the 1970s and 1980s Lakeland quickly established themselves as home freezing experts, providing customers with everything they needed to freeze, cook and then microwave at home. Lakeland even ran a ‘home freezing advisory service’, complete with a 20-minute film that could be rented out by schools, WI [Women’s Institute] branches  and other organisations to learn everything they needed to successfully freeze at home.

‘At the store in Northgate Street today, you’ll find a staggering number of products waiting to be discovered, including over 1,500 pieces of bakeware, enough kitchen foil and clingfilm to stretch all the way around the city walls, and enough Oven Mate to make every Chester oven sparkle like new!’