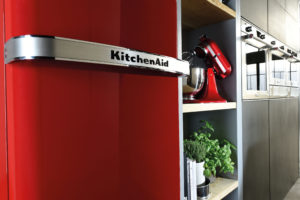 The fridge has a 221 litre net capacity and features a full metal door to provide durability, electronic controls and touch user interface, while a ProAir System constantly monitors the temperature and humidity inside. There is also a Fast Cool function, which quickly lowers the temperate at the push of a button, allowing the user to immediately cool fresh food after filling the refrigerator with groceries.

Launching on May 1, the Iconic Fridge will be available in six varieties (including left- and right-hand hinge), each retailing at £1,300.

Since the introduction of its stand mixer in 1919 and its first dishwasher in 1949, KitchenAid has built a complete product line, from utensils to appliances large and small. The KitchenAid brand celebrated its 90th anniversary in 2009 and forms part of the Whirlpool Corporation.