Kevin Towler and Potters Cookshop in the limelight

1st October 2017 News Comments Off on Kevin Towler and Potters Cookshop in the limelight 3,502 Views 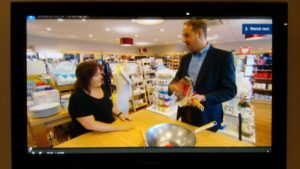 Housewares salesman Kevin Towler made his TV debut in the competitive cookery show ‘Come Dine with Me’ last week.

In the one-hour episode, which aired last Monday (September 25) on Channel 4, Kevin was one of four strangers from in and round Essex who took turns hosting a dinner party. The guests scored each other’s efforts, and at the end of the contest, the host with the most points won a £1,000 cash prize.

The broadcaster said: “Kevin is hoping to use his skills as a kitchenware salesman to charm his guests.”

Speaking to camera, Kevin said: “I’m the best salesman there is; I was salesman of the year a few years ago [he won the salesperson of the year category of The Housewares Innovation Awards 2012, organised by Housewares Magazine and www.HousewaresLive.net]. I talk way too much. People often say to me ‘why use that many words?’ I use 100 words instead of 10. I talk in my sleep as well!”

In the show, he was filmed at Potters Cookshop of Hockley in Essex showing a wok to staff member Alison Hobbs.

Kevin said his hosting approach would be “a mixture of my food and my personality, a few drinks and a few jokes”.

For his dinner party, Kevin served a starter of salmon and an avocado salad, followed by a main course of beef Wellington with seasonal veg, followed by baked Alaska for dessert.

His efforts won him third place in the contest. “Needless to say my limited cookery skills did not win me the £1,000, but I also didn’t come last!” he said. “It was an off-the-wall experience and I was really lucky to be chosen.”

Share
Previous White Brand Agency rebrands as Treacle George
Next HousewaresLive.net tracks down THAT waffle maker on Bake Off