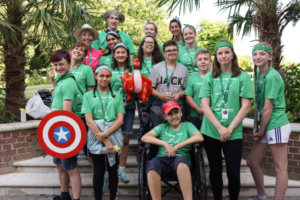 Staff at housewares supplier Kenwood have named Over The Wall as their Charity of the Year for 2019.

The company, headquartered at Havant in Hampshire, is partnering with the local charity which provides free residential summer camps for children and their families coping with serious illnesses and conditions.

The initiative is being led by Kenwood’s ‘Giving Something Back’ team, comprised of staff in the UK head office who will aim to raise £10,000 by encouraging colleagues to participate in fundraising challenges and activities.

The calendar of events includes participating in the Rough Runner obstacle challenge on the South Downs in April and a 100-mile cycle challenge across the capital called Ride London 100 in August.

Kenwood staff will also volunteer at the charity’s South Health Challenge camp in July. A team will unload and unpack lorries of medical supplies and equipment and generally help to create a camp environment that is safe and fun.

In addition, Kenwood has agreed to host a tea party in Havant to celebrate Over The Wall’s 20th anniversary at the end of the summer camp season.

Plus, staff will raise funds by using Kenwood’s food preparation and hot drinks products to provide the public with tea and cakes at the Emsworth Show in Hampshire, organised by Emsworth Horticultural Society, on August 26.

Alan Cummings, the Giving Something Back team sponsor at Kenwood, said: “Having considered a number of alternatives, we are delighted that the employees of Kenwood have chosen Over The Wall to be our Charity of the Year. We look forward to forming a prosperous, fun-filled partnership, to ensure as many children as possible can enjoy the benefits brought by this amazing charity.”

Over The Wall ceo Kevin Mathieson said: “We’re absolutely delighted that Kenwood employees have chosen Over The Wall to be their Charity of the Year. Supporting our cause by participating in fundraising events and challenges will have an enormous impact on the charity and will increase the number of children able to attend our camps.

“2019 marks our 20th anniversary year and therefore, it’s our aim to provide more camp experiences to children with serious illnesses than ever before. Kenwood will now play a big part in doing this, allowing us to bring mischief and magic to over 1,000 children and families.”